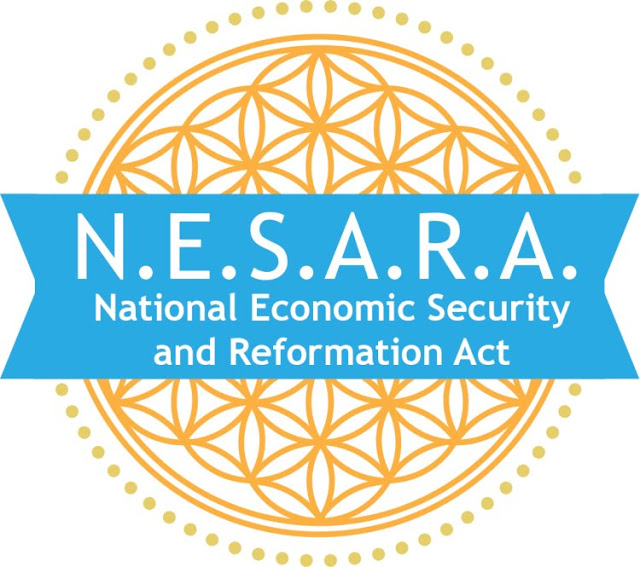 It’s an acronym for Global Economic Security And Reformation Act , and has been written and refined by great minds of the twentieth and twenty-first centuries in order to reset planet earth and humanity on a sustainable governance foundation.

The following 3 items must be accomplished straight away:

1) The global and public proclamation of a global jubilee or debt forgiveness, and universal reset of planetary earth/humanity back to a universal system of common governance in transparent good standing with other member beings of the Galactic Federation.

2) Implementation of GESARA as a universal constitutional framework for global governance in all 209 sovereign nations per the signed 2015 Paris Agreement on Climate Change, starting with the restored Republic of the United States.

3) Mass human disclosure of both non-humanoid (extra-terrestrial) life in existence on the surface of this planet and throughout our shared galaxy.

Why is GESARA even necessary?

The existing “cabal” governing authority has intentionally and methodically hid humanity’s historical truth (including alien occupation and genetic tampering) for over thirteen millennia; and thus why GESARA implementation is necessary now, as the galactic community has been tasked to stop and reverse the momentum of such a rebellious and blatant action against the Creator Source, and human species.  Together with humanity, all love warriors of the white light will now put an end to cabal deceit as well as re-institute universal truth and justice without further delay or negotiation.

Below are 25 specific items, but expect dozens more.

1.  Restore Constitutional Law in Republic of the United Sates of America.

2.  Remove USA, Inc. administration officials and all members of the US Congress from their positions due to their continuous unconstitutional actions.

3. Forces the USA, Inc.’s President, the Vice-President, Cabinet members, and all members of Congress to leave office.

4) Suspends all elections everywhere in the world, at all sovereign levels of government.

5) Allows new Republic of the United States appointees to temporarily govern the country’s affairs until fair and legal elections can be held.

7) Allows the Republic Congress to implement the natural Constitutional Line of Succession.

8) Eliminates all “states of emergency” thus declaring peace for every land abiding by GESARA and it’s alliance.

9) Forces the US military to immediately remove troops from all sovereign nations who no longer willingly accept them to reside on their soil.  That includes Iraq, Syria, Afghanistan and the Philippines.

READ MORE: Exclusive: Do you know about NESARA? I bet you DON’T, but it’s about time you DO!

11) Activates the Republic’s Treasury Bank and Republic Treasury, along with a gold backed USN currency printed and overseen by the Republic of the United States and not the Federal Reserve which will now be marginalized until eliminated.

12) Federal Income Taxes lies will be abolished, as will the old tax code; and new easier, simpler and global tax code will be implemented on non-essential items.  Essential items such as food and medicine, and used items, are exempt from the sales tax.

13) The IRS, FEMA, Shadow Government Lobbyists will all be jailed, arrested or worse.

15) Increases benefits to senior citizens and makes them permanent.

16) Establishes new Presidential and Congressional candidates within 120 days after G.E.S.A.R.A.’s announcement. An interim government will quietly be put in place as to handle the nation’s affairs until new leaders can be democratically elected.

18) A new U.S. Treasury rainbow currency backed by gold, silver, and platinum precious metals will be issued into public circulation.

19) Eliminates birth certificate records ato be used as chattel property bonds by the US Department of Transportation.

21) Resets all judges and attorneys back to Constitutional Law.

23) Establishes peace throughout the world as monitored by the UN Security Council.

Source: Ascension with Mother Earth
Via: Prepare for Change