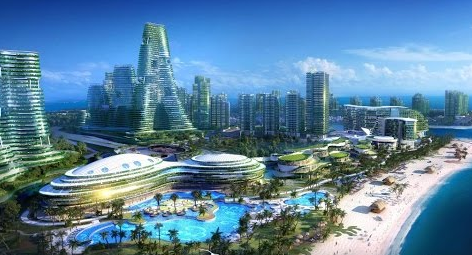 Vision of the Future via fifty8magazine.com

Our struggles will be greatly rewarded with levels of consciousness beyond anything ever witnessed in the history of the universe.
Consciousness contains the ideas, the thoughts, and the building blocks behind every reality.
Sentience, on the other hand, is the creative force that animates reality and experiences all possible emotions and sensations within them.
Consciousness creates reality, sentience experiences reality.
Together, consciousness and sentience create the totality of Creation.
Did you know that every single fantasy you ever had will be satisfied in some place and time?
2019
Women will report having orgasmic birth experiences in growing numbers.  Some women will have pleasurable birth experiences. This will become the norm as we ascend further into fourth density, where our Atlantean DNA will resurface and serve as the foundation for the Alpha Human.
2020
In Egypt the discovery of ancient documents that contain most of our true history.
2020 – The birth of Generation A, or Alpha.

The previous generations were named X, Y, and Z.  Generations Y and Z were the first generations to introduce new open-minded ways of thinking.  Generation A will not only raise human consciousness to higher levels, they will also be born with a substantial amount of active DNA.  Spiritual wisdom will be inherent to their being, and the majority of them will incarnate directly into fourth density with full-fledged awareness and abilities that have not been present on your world since the time of Atlantis.

Not only will poverty wages disappear across the globe around, but working hours will see a significant decline as well.

Before these changes can emerge, humanity must turn away from complacency. we must initiate a movement towards economic equality by bridging the gap between rich and poor.

Currently, many humans are burdened with jobs and chores that require monotonous, strenuous work.

The robot revolution will bring an end to much of the hard physical labor that many people on the planet are burdened with as human workers become replaced by robot workers that are much more resilient.

2025
The fear of dying subsides considerably by this point, and because of our newfound multidimensional awareness, we will be able to astral project at will and leave our bodies with clarity and grace, having total control of our passage from one dimension to another.
2027
The only the most positive timeline will remain, which will be called Alpha Earth.
Read More – https://www.fifty8magazine.com/futuretech