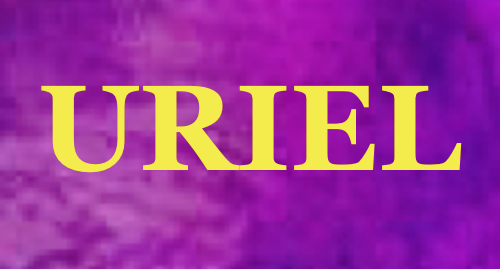 ARCHANGEL URIEL is talking about a tape where we can hear him singing  along the events that happened in Paris and the state if mind of people living in Belgium and Europe.A powerful prayer is given towards the end.

Time To Ask For Help,to Pray and Meditate :

I would like to pass on this message through Christine that I am Archangel Uriel, and that I am the Solo Singer on the tape upon which the singing of a choir composed of many angelic voices was recorded in a church in Kansas, USA, a few years ago. It was not by accident as we, the Archangels residing upon the higher dimensions of this planet Earth, have caused this recording by projecting upon the magnetic band an electro-magnetic impression of our actual singing upon our realm. We have used two musical instruments that don’t exist yet in the human kingdom. One is a trumpet made of higher dimensional wood which we produce in our factories on our dimension, of course. These instruments are replicated with a technology which doesn’t yet exist on Earth but will be brought to mankind when our Galactic ships are able to land. For this we have to wait the time when there will be no fear in the hearts of you, people, and for this there is need to go through a time of disclosure and of shifting to a more peaceful attitude that will eradicate the wars that are being waged on your dimension. Some seem to have become necessary to get rid of this monstrous terrorism which threatens to invade the European countries which were previously not burdened with the kind of situation that  have developed in those countries such as Syria and Lebanon, and previously in Afghanistan and Iraq, and now which are spreading to Turkey and Yemen. I would like to disclose, however, that the occasional attacks such as in Paris last year, which are attributed to terrorism, or extremism, are not from people based in the Middle or Near-East, nor from terrorists that are organizing themselves from these remote areas, but that, although the claim has been made that the attacker was ISIL, it was a deception. The attackers were not, and are not those who would take proud in taking the credit for the attack. The extremists themselves were lured into believing that the credit taken for the attacks came from their superiors at the top of a chain, or pyramid, about which they know little or nothing. There are dark forces operating from the astral plane. They are satanic in nature and follow suit following a legacy they have passed on centuries after centuries, and they have continued in their subsistence from the days of the Atlantean empire. They are able to influence the groups of people who are made of individuals with a very disturbed character. There is much more to say about this subject and I realize that the subject of the influence that forces residing upon the astral plane have upon the psyche of the souls of the people, is difficult, but it may become important for the heads of States to come to understand that massacres, such as the one in Paris, were not master minded by ignorant extremist factions causing devastation in countries such as Syria. The real terrorism is a centralized operation from satanic Illuminati forces that tend to operate in what they see as significantly occult. These beliefs of theirs have been accumulated over millennia of servitude to Reptilian forces that set themselves as the opponent to Christ, as well as the plan of Ascension, or of manifestation of the Will of God. They are not being removed yet because some souls have an entanglement in the mind-set of these dark forces. We have to proceed with care to disentangle their psyche from these overlords of darkness. It is something of this nature that is going on in Europe. The problem has been more acute in Europe where the cultures don’t use the English language. Those who use it have been more easily liberated by the voice of reason. When I came to Christine in the middle of the night to ask her to make some calls, I said it was for a problem that was more sociological in nature than political. It is in regards a captivity from which the people in Belgium and Europe need to be liberated from. The problem was in connection with a materialist outlook on life. The depression of the people I asked her to pray for is the result of a perception of gloom and doom which attracts that same reality to them. The calls I have requested have been used to free the population from the influence of those dark powers that I have been speaking about. They will eventually bring about a resurrection in better circumstances.

I want to renew my promise that I will multiply by ten your Calls and prayers when you ask to establish an arc of contact with the Archangel of Enlightenment that I am, for the turning of worlds and the healing of the nations. Call me with the following invocation or one of this type, and then recite the prayer or one of your choice 3 to 33 times. I love you with all my heart.

O Archangel Uriel, I am calling to you to place with me the blessed radiance of your electronic presence so I can be a magnet, by the sacred fire of your heart, for you to sweep into the world the enlightenment of your Ray and a great ILLUMINATION. I am grateful for your intervention.

I now pray to the beloved Mighty Presence of God in me, to the Light of far off worlds from every system and galaxy and Star, to send forth now thy legions of Light from your cosmic heights to descend in numberless numbers by the millions. Beloved Father Supreme, may the Light of Cosmic Illumination, the Light of the Violet Fire of Freedom’s love, the Great Cosmic Light and the Light of Cosmic Victory be poured in from cosmic sources like the power of a million Niagara falls, ceaselessly descending to permeate the atmosphere of earth, eradicate all entities, all illusion, deception, and karma, and replace them all by the Great Cosmic Light!

LINKS TO THE VIDEO: