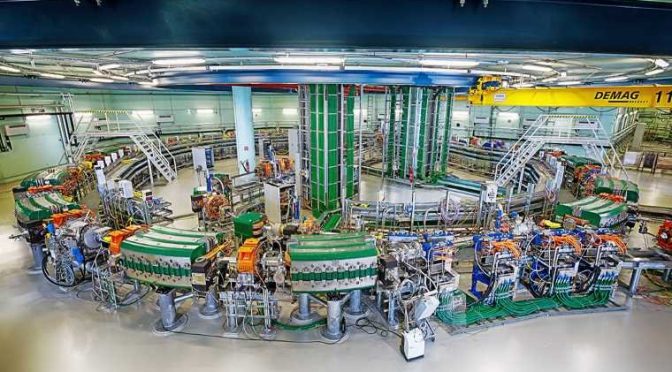 In 1996, CERN co-founded the Proton Ion Medical Machine Study (PIMMS) to treat cancer using beams of charged protons and ions to blast tumors. Called hadron therapy, large particle accelerators create either a proton beam or an ion beam that is tight enough to target tumors deep in the body, near sensitive organs, and reduce possible damage to any surrounding tissue. The four hadron therapy centers in Europe providing hadron therapy have helped cure roughly 260,000 people since they opened.

As a result, Europe has become the leader in cancer treatment worldwide. The biggest hurdle, however, is that building a large particle accelerator is not cheap, and therapy can be a fortune without adequate medical coverage.

“NIMMS aims at a technology leap by the wide use of superconductivity and new magnet designs based on recent work for particle physics accelerators,” Dr. Maurizio Vretenar, NIMMS project lead at CERN, told The Debrief. “We are also considering alternative and more compact accelerator designs and extensive use of artificial intelligence in the design and operation of the accelerator.”

“Ion radiotherapy directly damages the DNA of cancerous cells, creating a large number of double-strand breakings that are not reparable and lead to the death of the cell,” explained Dr. Vretenar. “Ions are much more effective than other forms of radiotherapy, and on top of that, the damage can be easily concentrated on the cancerous region by adjusting the size and the energy of the ion beam, sparing the healthy tissue close to the cancer.”

Because so few facilities can offer hadron therapy, NIMMS is developing models to make the particle accelerators smaller and less expensive. By reducing the barrier to build and operate a particle accelerator, more hospitals may put them into operation. If the system can become small enough, existing medical facilities will not require much additional real estate to install them.

“Our favoured design is a superconducting synchrotron ring only eight meters in diameter, followed by an eight-meter long “snake” made of superconducting magnets that rotates around the patient to deliver the ion beam on the required position. Including all shielding and protections, this system will occupy an area of about 40 meters by 20 meters,” Dr. Vretenar stated.

The specific CERN accelerators Dr. Vretenar refers to create carbon ions at 430 MeV (Mega electron-volt), which is enough energy to pass ions over and through a human body but are small enough that they don’t require a ton of space.

“A new accelerator design with improved intensity and operational flexibility would also enable a wide research programme to optimise ion species and treatment modalities,” Dr. Vretenar wrote in a previous article. “This would allow the exploration of innovative paths to the treatment of cancer such as ultra-short FLASH therapy or the promising combination of ion therapy with immunotherapy, which is expected to trigger an immune response against diffused cancers and metastasis.”

Dr. Vretenar admits that cancer is a complex disease and is well aware that it cannot be fought with only one type of tool. However, PIMMS has proven that more tools in the kit can lead to victories on the battlefield. The NIMMS project strives to make those tools more affordable and allow more people to access ion-based therapy.

“With this technology, we aim at adding a new flexible and possibly affordable element to the arsenal of cancer-fighting techniques. While conventional radiotherapy will certainly remain in use for a large number of cancers, deep cancers close to critical organs, in particular, the hypoxic type, will be more effectively and precisely cured with ion therapy,” Dr. Vretenar told The Debrief. “On top of that, by sparing radiation to nearby organs, this technique has a positive impact on the quality of life of patients after treatment.”

Dr. Vretenar believes that the future of cancer treatment will be an elegant mix of human specialists and AI algorithms “that analyze patient DNA information, their previous medical history, and huge amounts of clinical data for similar cancer cases [to] decide the treatment strategy with the highest probability of success.”

The future of cancer treatment will be less invasive as the ability to destroy a tumor without bloodshed is already a reality. If the process can be fine-tuned enough, the next step is to ensure this procedure is available worldwide and accessible to those who need it.