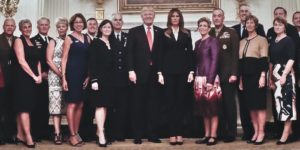 On Oct. 5, 2017, President Trump held a gathering at the White House for his military generals and their spouses at which he spoke about that occasion being the calm before the storm.

On this and later occasions, he refused to say more about what the storm was, except “you’ll find out.”

Increasing amounts of evidence are being presented of corruption amounting to treason among some political personalities.   As Q predicted.

Who is Q? I trust Matthew Ward’s description:

“According to Nirvana’s monitors of Earth, Q is a few individuals who have extensive personal knowledge of ‘Deep State,’ the secret society we call Illuminati and others refer to as the cabal, One World Order, Shadow government and other designations.

“Qanon, a loosely allied group of individuals who research or have personal knowledge of information not readily available to the public, follow Q’s enigmatic messages posted on an Internet site and interpret those with varying degrees of accuracy. Because the intention of all these individuals is to expose the dark ones, information coming from Q, or Qanon also, is ridiculed as ‘conspiracy theory.’” (1)

Q’s work to bypass the mainstream media and communicate directly to the American people on what the Alliance and the deep state are doing is a chess game that Q says has only one ending: The fall of the cabal.

Q called their own operation “the biggest insider drop in the history of the world.” (2) I remember following the operations in 2009 of who the Alliance would have been then. Known simply as the “White Hats,” they mounted sporadic acts of resistance. They mutinied against orders, held onto the nuclear football, exposed plans to carry nuclear weapons to the Middle East, etc.

At that time, we all followed the work of Special Counsel Patrick Fitzgerald, providing the momentum then that A.G. Barr provides now.

We awaited the mass arrests for years. They may never come. They too may have been disinformation. In the end there may turn out to be only a few thousand actual sealed indictments. The numbers may have been cited to spook the cabal.

I stopped following the Alliance’s work once I began to speak to Archangel Michael – again another moment when my life was deflected into an altogether-new direction. (3)

The elegance and invisibility with which everything is being carried out is astonishing. The forethought displayed in Q’s linked communications with the public are awesome.

I think we’re now – or within days of being – in Red October, the storm before the calm that Blossom’s Federation, James McConnell’s St. Germain, and others have been referring to, along with Q and sometimes perhaps following Q’s lead.

Implosion or explosion, the deep state has been exposed in enough damaging information to date to end its reign upon Earth. And yet the revelations keep pouring in.

What will be the outcome in the social and political arenas of the conversation we’re having around social reconstruction? Michael told us in 2013:

Archangel Michael: Does the conversation expand organically and naturally? Does the energy go out to the entire planet, those who want to hear and those who don’t want to hear? Yes, it does. But it begins with the lightworker community. That is what we have need of.

Steve Beckow: And I suppose then more and more people join the lightworker community?

AAM: Exactly, until it is one family and one path. (4)

Many people, hearing that, might not be able to imagine how this unprecedented expansion of the lightworker community could occur.

But I can. I’ve spent time in what I call “transformative love” and what Patricia Diane Cota-Robles recently called “the Mother’s divine transfiguring love,” (5) to be found in the higher dimensions, and, in the space of that love, I can well imagine everyone automatically being a “lightworker.”

The world will work for everyone. That’s in the very nature of Ascension. Higher dimensionality = a world that works for everyone.

We draw closer and closer to the time when the train leaves the station, the time of separation – an ironic term for a return to oneness. Never mind prosecution from earthly authorities; missing out on Ascension makes that pale in comparison.

(5) In Day 4 of the 34th Annual World Congress on Illumination at https://www.youtube.com/watch?v=ktUp4F5bflU.