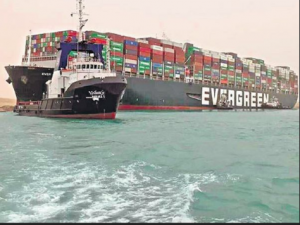 Evergreen is the Final Wake Up Call

Q and Team have designed the Evergreen operation to awaken Humanity en mass and to let them face the reality of sheer evil committed by forces that tyrannised them and changed their perception of truth. It clearly is showing the world who are involved in this crime against humanity, while breaking up the entire Deep State-infrastructure of trafficking rings.

This operation blocked the Suez Canal for maximum public attention. It was planned not only to break up the global monetary system, but also to end the Deep State power-structure, and even more to show the populace their illegal children, organs, nuclear weapons and drug trafficking activities.

The symbolic phrase: “We shall see where the ship runs aground” signifies the end of humanity’s nightmare. The Evergreen container vessel is the bombshell that must awake mankind en masse, when the videos are shown of children and women trafficked and freed from containers. Then, people will understand what has happened already during hundreds if not thousands of years. To satisfy their Satanic cults, with among others, the scarification of young children to Satan, as they believe to maintain their authority over planet Earth.

This operation, is a White Head false flag. The vessel called ‘Ever Given,’ is partly owned by the Clinton Foundation, why HRC – Hillary Rodham Clinton is written on its bow, and another major owner is Walmart.

Over a thousand trafficked children and dead bodies have been rescued out of the shipping containers by US Navy Seals, in collaboration with the Russians, sources say. The Navy Seals also found Weapons of Mass Destruction on the ten story high vessel – which were believed to start a war in the Middle East.

Many other ships that were blocked in the Suez Canal last week were also inspected and consequently discovered to be carrying weapons – also believed to be used to start a fresh war in the Middle-East. In order to reclaim the Deep State power control over planet Earth, under the Biden administration. Most of the weaponry was bound for Mossad to be given to Muslims by Israel.

The Human traffickers were arrested and their cartels busted – causing them losses of critical income worldwide. As result, this Operation was said the DS lost 400 million $ an hour, that still pales in comparison to what those children were undergoing.

The cargo, consisting about 20.000 containers has been carefully inspected, and off loaded into other vessels for further transport. The ones containing children, women, weapons of mass destruction, drugs and uranium, en route to Rotterdam and Baltimore, are confiscated, and will be recorded on video to be shared all over the world to awakening the masses.

It is not likely the MSM will report these findings and/or show parts of the videos, leaving the public questioning about the truth the media provides? And that could mean the end of the cabal controlled media domain. New sources and outlets will emerge, with real journalism, reporting uncensored facts and truths.

The populace will see and understand the crime against humanity in real time and are soon informed about the fake pandemic too. They will understand the mass bribery of hospitals and doctors to keep them in the virus plot.

The container ship is as high as a 10 story building, with a length of 400 metres, and a width of 65 metres. It is still anchored in Greater Bitter Lake to be released after payment of US$ 1 billion is made for occurred damages to the Sues Canal Authority.

This Evergreen operation is brilliant in its simplicity, logistics and efficiency. Especially intended to awaken the masses from their profound inanity. If the media doesn’t report soon about the children freed from the containers, the public will be shocked to learn why the MSM did not report about it.

Of course, this malpractice by the Deep State cabal was known long ago and could have been dealt with in other ways without a Suez Canal blockade. But when maximum impact is required, genius is the only solution. An operation that kills several birds with one stone!