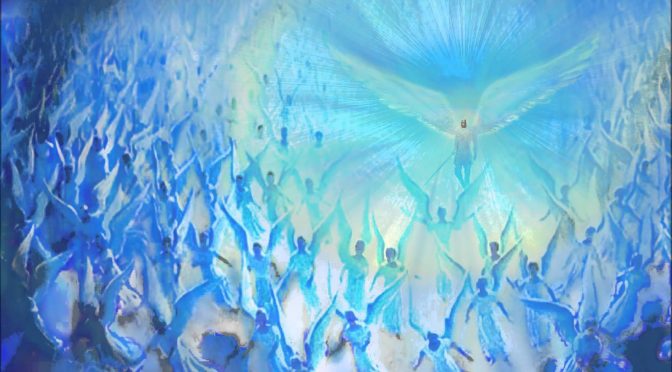 10/12/2019   Sharon: Archangel Michael, something has come to my attention, (I’m smiling I can feel his soothing energy)…. something has come to my attention that needs to be addressed.
On this world, people have the right to be self-governing, they have free will. However at this time, many people are not operating of their own free will – they’re part of the system and their thinking is influenced by it. They are not acting from free will. How much leverage do we as lightworkers have to intervene in their lives?
AA Michael: Thank you Sharon for granting me this opportunity to speak to your people. Yes, your people do have free will, earth was designated a free will zone. However, at this time there are extenuating circumstances, and those are that most people on your planet are negatively oriented as they are possessed by demonics. Partial or fully, they are possessed and not in control of themselves as they would be if they in fact could retain the entirety of their faculties.
Your earth was at one time an Eden, with the earthlings as powerful gods who walked its lands. It was a beautiful planet of such grace and wisdom, and now look what it has become. A world that is in steady decline, a world that has been captured and controlled by beings who mean it only harm.
Those beings, the demonics, the spirits or ghosts, the negative alien races who have invaded and who are continuously attempting to overtake – all of those beings are out of their rightful places and it is up to all of us of the light to put these beings back into their proper place. They are asked to realign with the light and if they refuse. they are sent to the galactic sun, to be reabsorbed and to exist no more.
Any such being found upon your planet will be removed, be it sooner or be it later but it will be removed. This is my charge and I am at your disposal to remove any such being or if there is suspicion of the presence of any such being, call on me and I will be there to help you.
If there is fear of interference with the free will of another, the rule of thumb is this: in the case of demonic possession, full or partial, posession of another spirit or entity, tags and implants, the witness is allowed to remove all such occupations in order to restore the victim to exercising their free will to the best of their ability.
You are not interfering with universal law. You are allowing soul contact therefore universal law, to be re-established within the victim. So you will not experience repercussions for this. Not from the light.
Sharon: Yes, the dark may not be too happy with you. LOL But bring them on, we’ll take care of them too!
AA Michael: Yes, I stood by you the night a full overtake was planned for you.
Sharon: Yes, thank you. I would’ve ended up in the mental institution and filled full of drugs. Or dead.
AA Michael: Your world is led astray. Your medical industry does not understand that the cause of imbalance is negativity. Possession is part of that.
Sharon: So, we’re allowed to intervene if we suspect demonic attachment. If there is no intervention and maybe it’s us that’s influenced, then what?
AA Michael: The soul will protect itself from harm.
Sharon: Because I’ve had people try to cast spells on me to order me to cease and desist because they think I’m dark. LOL
AA Michael: And you will be protected from them.
Sharon: Yes, they had no effect.
AA Michael: You are aware of the work I do, as you work with me at times. This is part of your training as you have always been interested in the dark vs. the light.
Sharon: So I have firsthand experience now, for sure.
AA Michael: We helped you when you did not understand what was happening but now we see you are spreading your wings to help yourself. Using shielding and transmutation of dark energy are the first steps but as you increase in your skills, you will then be able to see the dark ones and be able to learn to fight them off in your physical life.
Sharon: Good! I want to! I’ve seen them astrally. And I’ve seen their ships. Now I want to see everything! I want to see everything they’ve built around our planet. I’ve seen the DUMBs and I want to see everything.
AA Michael: Hold on, my child. Patience. We take these things in small steps. And that has to do with your level of fear. This is also part of your test to the light. We introduce the things you fear into your lives to see how you react – whether you fear still or whether you are no longer fearful. Everyone is tested in this way – daily.
Sharon is not worried about Men in Black, demonics, reptilians … she has seen them in forms other than physical but she understands they are around and attempting to bring her down. She does not fear them.
Sharon: Just give ’em to me! I’ll deal with them! LOL
AA Michael: We will speak in the astral again my dear. You are in need of more coaching.
For all who are listening, understand that your intervention is welcome when there are attachments present. All these negatives must be banished from this planet so it can fluorish again.
You are one of us and you have our powers. Stand in your power and align with the Light. We will prevail.

I bid you adieu,
Archangel Michael