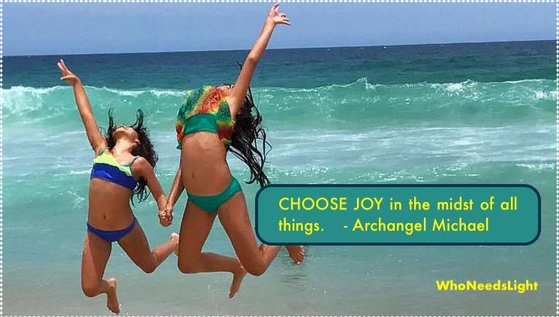 Archangel Michael:
It’s story time…
Once in time on Earth on a playground near a school where a group of children were playing,  a brand new little energy was born.
This little energy did not yet have a name, yet it was good to be alive. After a bit, the little energy bumped into a bigger energy who already had a name. A nasty sound came from an older child as she pointed at a small boy and shouted that name: “You’re-A-Pig.”
Before the little energy could wonder any longer what its name would be, the small boy looked down at his body, and taking his cute, pudgy finger and sticking it into his soft belly, he declared, “I’m-Fat.” Although the little thought didn’t yet understand its name, it was happy to be claimed by the small boy. The little thought stayed close to the boy as the boy said over and over in his head:
I’m-Fat?I’m-Fat…I’m-Fat.I’m-Fat!
It seemed the little thought had found a home as they headed to the small boy’s house to stay. That night at dinner, the little thought was presented to the family. When the small boy was picking at his food, not eating his dinner, his mother kindly asked him if something was wrong?
At first, the small boy refused to say anything. And although it didn’t understand why, the little thought panicked – clinging to the boy until they both burst out together: “I’m-Fat!”
The sister laughed.The brother punched the small boy.The dad ignored.The grandma put more food on the small boy’s plate.The mother cooed and comforted her son.And … the little thought, named I’m-Fat … grew … stronger.
The next day and from then on, the little thought and the growing boy were fast friends. They went everywhere together. They went to gym class at school. They went on the boy’s first date, and gave their first kiss. They grew even closer as the boy became a man, going to parties and the man’s first job interview. They were inseparable.
And the thought was happy, except for one thing.  The thought seemed to have a never-ending hunger. The thought learned that it could get very close to the man by presenting in his mind as a memory or as an idea, and then each and every time, the man would respond with attention and emotions.
And for a moment, the thought would feel better and grow stronger.
As the days went on, the man experienced the usual ups and downs of life. The thought couldn’t help notice that the happier the man was, the more alone and the hungrier the thought was. Eventually, the thought began to seek out and to stick to other thoughts roaming around in the man’s life.
The thought named I’m-Fat began to bond with similar thoughts named “I’m-Ugly,” “I’m-Stupid,” “I’m-Late,” “I’m-A-Failure,” and “I’m-Never-Going-to-Change.” These thoughts realized that whenever they joined together, it was much easier to get the man’s attention.
In fact, it was so satisfying to ruffle the man’s emotions and to claim the man’s attention that – before they knew what was happening – the many thoughts had clustered together, growing so close and dependent that they had turned into a whole new form of existence, called a “thoughtform.”
Of course, the thoughtform had its own name too. It was called “This-Is-Me.” The thoughtform was strangely pleased that the man no longer knew the difference between himself and the thoughtform.  The man had given these thoughts so much power since childhood that he had no idea he had created a group of thought parasites, which had become so powerful it was syphoning off the energy the man could have been using to make his dreams come true.
Just when it seemed it couldn’t get worse, the thoughtform This-Is-Me met… the thoughtforms of society.
To be continued….
Serving alongside you,Archangel Michael
The next two titles:#5 Live FREE Forevermore with the Use of the Mighty AND#6 How New Earth Children Are Raising Their Parents
(Channeled by Christine Burk & Dr. Kathryn E. May, WhoNeedsLight, 26 September 2018. Please include channels and full message when reprinting. This Story Ends in Glory!)